Worstead is in North East Norfolk, once a populous town but now a small village served by one church, whereas in its prosperous days it had two of its own. The village consists of a main street and a square, where markets and hiring fairs were held.

Wrdesteda or Ordested, as Domesday calls the village, was given by King Canute to the abbots of St. Benet of Holme, amid the Norfolk Broads. These abbots held the manor till the dissolution of the monasteries in 1538. During the time of Edward the Confessor the manor was held for the abbots by Robert, an officer of the cross-bow men. His son Odo took over the holding on his father’s death and assumed the name of De Worstead.

Worstead gives its name to a type of cloth, worsted, woven in the village in the middle ages. From the Conquest onwards Flemish weavers migrated to England, but it was not until the reign of Edward II that their cloth came to be known as worsted. Hitherto most of the Norfolk wool had been exported to Flanders whence it was imported in the form of cloth.

Early in his reign Edward III, married to a Flemish princess, actively encouraged immigration of Flemings to “exercise their mysteries in the kingdom”. Attracted by abundant supplies of wool in England, a considerable number of weavers settled in and around Norwich where the landscape resembled their native country and where Norfolk sheep produced the same long staple as they had used in Flanders. This was made into the cloth called worsted (defined as a woollen fabric made from well-twisted yarn spun from long-staple wool combed to lay fibres parallel) giving both warmth and strength.

Thus was founded the name of a skilful trade which brought not only wealth and prosperity to England for 600 years but also provided a household word throughout the world.

William Paston, 1378-1444, wrote to his cousin Robert:- “I pray that you will send me hither two ells (ell = 45″) of Worsted for doublets, to happen (wrap me up warm) this cold winter, and that ye enquire where William Paston bought his tippet of fine worsted cloth, which is almost like silk, and if that be much finer than that ye should by me, after seven or eight shillings, then buy me a quarter and a nail (13¼”) thereof for collars, though it be dearer than the others, for I shall make my doublet all Worsted, for the glory of Norfolk.”

The weavers brought in a good wage each week; by 1830 the weekly wage was 20-25 shillings. Weaving flourished in the village for over five hundred years, till the last weaver, John Cubitt, died in 1882 aged 91. The hand-loom weavers were forced out of business by the power-driven machines of the West Riding of Yorkshire where both water and coal were readily available. And there it remains to this day, centred on Bradford and Huddersfield.

Various reminders of the weaving industry can be seen in the village, especially in the church. On its floor are several brasses telling the same story engraved in Latin, such as “Tom Watt, worsted weaver, died 16th August 1506”.

Some of the weavers’ houses in and around the village survive. They are large and spacious, for it was in these that weaving looms, l2ft high, were used. Each house had its own cellar with wooden beams interlacing the ceiling, wherein the wool was stored at a cool even temperature. The crypt of one house with a groined ceiling still survives at the bottom of a derelict stair under the bake house in the market square.

As time passed the cloth trade of Worstead and of Norfolk as a whole came to be centred more and more upon Norwich.

Footprints on the Sands of Time

The book ‘Footprints on the Sands of Time’ came about because of a desire to celebrate and preserve the history of Worstead in one volume of work and for future generations.  It is written by Peter Brice and illustrated by Stefan Ganther, and sponsored by the Worstead Village Amenities Trust (no precept money involved) – any profits from the sale of this book will return to the Trust to be used for the benefit of our community.  The book is for sale for £9.95 (small charge for postage) and is available from the Clerk. 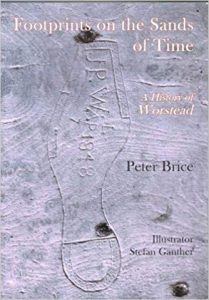 The parish of Worstead has two main claims to fame: it gave its name to the cloth called worsted; and the group of Baptist buildings in Meeting House Hill is unique among the remains of 19th Century non-conformity. However the parish has much more to offer, for instance to those interested in, say, archaeology, architecture, landscape, religious and social history. We have a rich heritage that deserves to be better known in and beyond our community.

The Worstead Heritage Map and Trails unveiled by the Worstead Guild of Weavers, Spinners and Dyers at the Worstead Festival in July 2012 includes two trails of 40 sites many of which have links with the Wool Trade and Worsted cloth which made the village world famous.

This website uses cookies to improve your experience while you navigate through the website. Out of these, the cookies that are categorized as necessary are stored on your browser as they are essential for the working of basic functionalities of the website. We also use third-party cookies that help us analyze and understand how you use this website. These cookies will be stored in your browser only with your consent. You also have the option to opt-out of these cookies. But opting out of some of these cookies may affect your browsing experience.
Necessary Always Enabled

Any cookies that may not be particularly necessary for the website to function and is used specifically to collect user personal data via analytics, ads, other embedded contents are termed as non-necessary cookies. It is mandatory to procure user consent prior to running these cookies on your website.